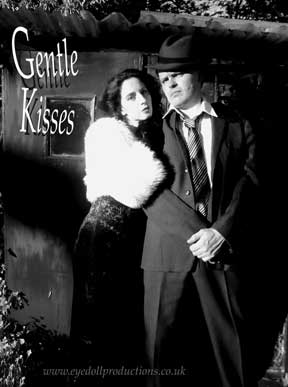 Gentle Kisses is a Film Noir set on an allotment. An allotment inspector is on the case, investigating a missing melon and pitchfork. The main suspect is Toni Wilson, singer , who has a fetish for creating her own audiences.

Created for the 48hr Film Project in May 2010 in Edinburgh.

The Eyedoll Productions Team were given the genre of Film Noir.

The characters were Tony or Toni Wilson, Singer. The prop was a box and the line of dialogue was "Whatever you do don't tell her" .

Directed and edited by David Hutchison.