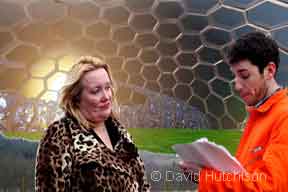 Ariel McGuinty , tired of life searches for a dramatic way to shrug off this mortal coil, but things don't quite go to plan when she meets Rearview Park trainee Wee Malky. Vocals by Janet De Vigne accompanied by the Edinburgh Chamber Orchestra. Additional music by The Great Insanity. This is the third short film with Derek The Robot.